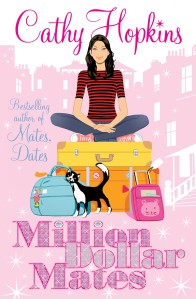 DETAIL: Million Dollar Mates is set in a glamorous apartment complex – No 1, Porchester Park in Knightsbridge, London. Jess Hall’s dad is the new general manager, and is moving Jess, her brother and her pet cat Dave into a staff apartment there. At first Jess is dreading the move… and then she hears that Porchester Park is strictly A-list and she’ll be meeting the uber rich and famous. Sounds fab but will life there be all she imagines it to be?

BIO: Cathy has had 63 books published so far and principally writes for the teenage market where her books have been translated into 34 languages. Her five teen series to date are: the Mates Dates series, the Truth Dare series, the Cinnamon Girl series, the Zodiac Girl series and Million Dollar Mates. Cathy has also written standalone novels for teens: Dead Dudes, Love At Second Sight, and Playlist for a Broken Heart which will be published in May 2014.