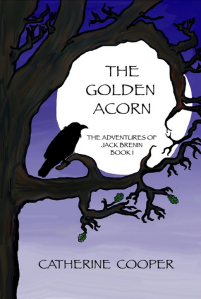 ITEM: First edition of The Golden Acorn ~ The Adventures of Jack Brenin, book one signed by Catherine Cooper and co-illustrator Ron Cooper.

This edition is rare as there were only 1000 ever printed. The Golden Acorn has gone on to be a hugely successful, the first of a five book series. It won a Brit Writers Award for ‘Best Children’s Book’ in 2010, and Catherine Cooper was awarded ‘Brit Writer of the Year 2010’. In 2011 they signed a contract with a Hollywood film company. in 2012 the series was tipped to fill the Harry Potter void, and this year, The Golden Acorn was chosen as a National Literacy Trust guided reading book for KS2.

DETAILS:
The Golden Acorn is the first book in the bestselling Jack Brenin series. When Jack Brenin finds a golden acorn lying in the grass, little does he know that it is the beginning of a thrilling and magical adventure. Just an ordinary boy, Jack has been chosen for a hugely important task, and enters a world he believed only existed in legend. Full of twists and turns, talking ravens and mischievous Spriggans, ‘The Golden Acorn’ is a hugely entertaining and exciting tale from a very talented new author. Your kids will love it, and so will you! This brilliant story deservedly won the Brit Writers’ Awards 2010 for unpublished writers. Jack’s adventures continue in ‘Glasruhen Gate’ and ‘Silver Hill’. The Golden Acorn can be read as a stand-alone or as the first book in an ongoing adventure. Once you’ve read this book we’re sure you’ll want to read more about Jack Brenin and the magical ‘Otherworld’ he becomes involved in. Book 1: The Golden Acorn (2010) Book 2: Glasruhen Gate (2011) Book 3: Silver Hill (2011) Book 4: The Lost Treasure of Annwn (2012) Book 5: The Oak Lord (Coming Autumn 2013)

BIO:
Catherine Cooper was a primary school teacher before deciding to write for children. Catherine’s love of history, myths and legends and the Shropshire countryside around where she lives shines through her charming stories. The first book in this series, The Golden Acorn, was the overall winner of the 2010 Brit Writers Awards.

More information about Catherine can be found at http://www.pengridion.co.uk.