210: Signed copy of Spies in Disguise-Boy in Tights by Kate Scott 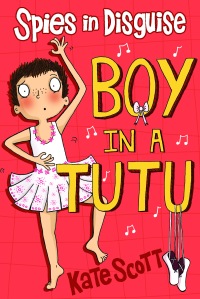 DETAIL: Spies in Disguise: Boy in Tights is a comedy-adventure (for 7+) about a boy who discovers his parents are spies and has to go undercover — as a girl. Soon he has a spy mission of his own, but can he complete it without revealing his true identity?

BIO: Kate Scott is a published poet, TV scriptwriter and children’s author. She has written commissioned fiction and non-fiction for Hodder, HarperCollins, Pearson and Oxford University Press. She is the author of the Spies in Disguise series published by Piccadilly Press (Boy in Tights published in 2013, Boy in a Tutu forthcoming in 2014). She has also worked as an editor and a creative writing tutor.