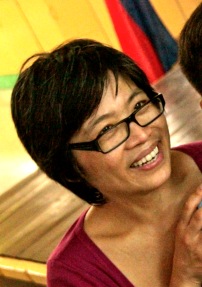 ITEM: Candy Gourlay will spend the day with your nominated school in the United Kingdom. Suggested itinerary: A presentation to an audience of two year groups followed by two workshops with class size groups in which the children plan a novel in 30 minutes. You can read more about Candy’s school visits on http://www.scbwi.org/speakers/candy-gourlay Candy is based in London but will travel anywhere. The item does not include transportation which the nominated school (or the donor) must cover in addition. Thank you in advance!

BIO: Candy Gourlay is a Filipino author based in London. Her book Tall Story, set both in the Philippines and London, was nominated for the Carnegie Medal in 2011. It has won the Crystal Kite Prize for Europe and the National Children’s Book Award of the Philippines and was shortlisted for 13 prizes. Her new book is a ghost story called SHINE. http://www.candygourlay.com