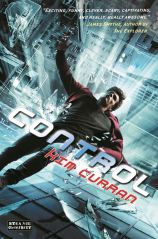 ITEM: Signed copies of Kim Curran’s first two books, Shift and Control plus Kim will name a character in her latest book DELETE after the winning bidder.

BIO: Dublin-born Kim Curran studied Philosophy at university with the plan of being paid big bucks to think deep thoughts. While that never quite worked out, she did land a job as a junior copywriter with an ad agency a week after graduating. She’s worked in advertising for the past fifteen years, specialising in writing for video games. Her first book Shift was published in autumn 2012 with the sequel Control out August 2013.